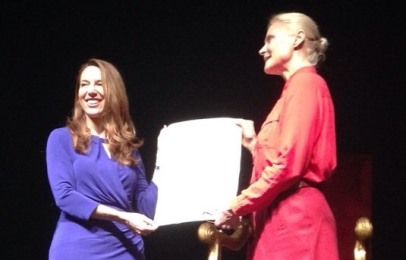 ROME – (ITALY) Italian actress Isabel Russinova was named Honorary Cultural Correspondent, by the Executive Board of MACTT – Mediterranean Academy Culture, Tourism and Trade, NGO Maltese, for the realization of the show “Agatha”.

A simple ceremony which took place following the last staging of the show Sunday, April 12 at the Teatro Belli, in the presence of the ambassador of Malta in Italy SE Vanessa Frazier and the President of MACTT (Mediterranean Academy Culture, Tourism and Trade), Sergio Passariello. The award was much appreciated by the plaintiff.

The title of the corresponding cultural Mactt is offered to individuals who with their business, enhance and promote the culture of Maltese and Mediterranean World. It ‘was in charge of External Relations Italian Agostino Ingenito to suggest that the Council of the Mactt evaluate the award of recognition.

Isabel Russinova in a show created and produced along with fellow Rodolfo Carraresi, has played Agatha Barbara, the first woman appointed to Malta and the first female president of the ‘900 European, that through its commitment has enabled women to achieve equal rights and dignity. Great innovative and cutting edge for the Welfare of his country, has allowed poorer access to education, even the lower classes, and health care, while significantly improving the quality of life of the population.

As Minister, in the fifties, had the great merit of establishing compulsory education, increasing the intake of hundreds of teachers. It was also the Minister of Labour, Culture, Welfare, before you fill the role of President of the Republic from 1982 to 1987 for the Labour Party, in an island located in a strategic position between Europe and Africa, ancient goal of conquest, where still feels the soul of the Phoenicians, the testimony of the Roman Empire, the influence of the Arabs, the history of the Angevin and Carolingian, where even today the soul of the Knights.

“We are delighted to have given this award to actress Isabel Russinova – said President Mactt Sergio  Passariello – The presence of the ambassador of Malta in Italy S.E. Vanessa Frazier has ensured a fitting tribute to the commitment undertaken theatrical. We hope that the cultural project undertaken can be extended and shared with the other initiatives that we are supporting in Malta and in the EuroMed “.