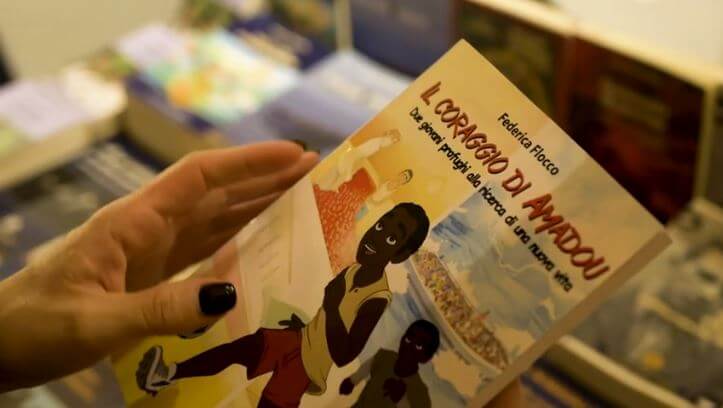 The theme of immigration is not only made up of chronicles and political debates, but also of stories that have arrived at people’s hearts. Like the the long journey of Amadou, told by the writer Federica Flocco in a training novel for children that has landed in Malta after having achieved success in Italy.

Malta, the Mediterranean country that in recent years has shared the management of an unprecedented migration phenomenon by sea more than any other with ours. Malta, the country from which Europe has returned to dialogue to share the responsibility of welcoming, after years of mutual accusations and deafening silences.

Just that country, Malta, welcomed the neapolitan writer yesterday on the occasion of the Malta Book Festival, the most important exhibition dedicated to the world of books in Valletta.

The presentation of the book “Il coraggio di Amadou”, organized by the Ngo MACTT (Mediterranean Academy of Culture, Technology and Trade), was hosted in the stand of the Italian Cultural Institute in Malta, which for the occasion was the most popular and animated among the exhibition spaces opened in the splendid setting of the Mediterranen Conference Center.

Federica Flocco was welcomed by the President of MACTT Sergio Passariello and the director of the ICI of Valletta, Dr. Massimo Sarti. Both have launched an invitation to the spirit of humanity that must be the basis of any discussion on immigration, regardless of any position taken on the management of such a complex phenomenon.

The author then took the floor to talk about the adventure of Amadou on his journey of hope, fleeing war, poverty and disease. And to tell her personal adventure as a writer, in the writing and sharing of this literary work that led her to get excited and share profound moments with so many people, boys and adults, discovering the other side of public opinion in front of the theme of immigration: that human side which certified the success of the book, first among the boys and then among the adults, who were infected by the purity of mind with which their children are left infected by reading this book.

A success that today has crossed national borders with the arrival in Malta, where the writer has received the praise of many people, starting from that of the teacher and journalist Maria Grazia Strano, moderator of the debate, up to that of those present, Italians and Maltese, linked by a message of brotherhood and solidarity stronger than the battles between governments in recent years.

So, after the Malta agreements for the shared management of the welcome, always from the Mediterranean island, with the welcome given to “Il coraggio di Amadou”, a new blow to the wall of selfishness and indifference has arrived.