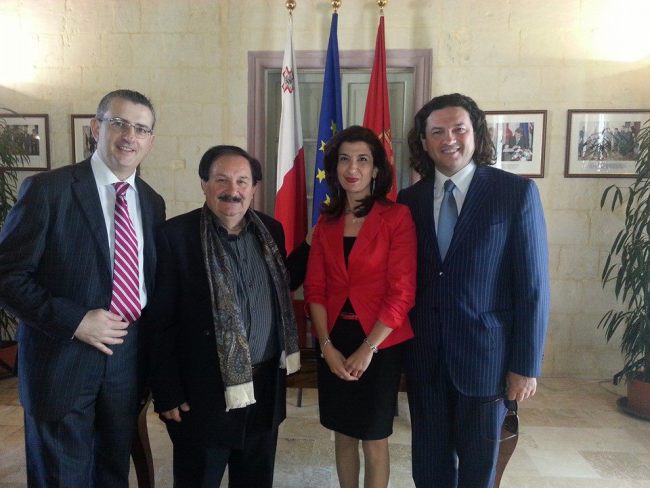 FareAmbiente: MACTT a partnership “Environmental” for the future of the Euro-Med

Thanks to the dual role of Eng. Mauro Pusceddu both as Deputy Coordinator of the Region of Campania “FareAmbiente”, the Ecological Movement as well as the European Cultural Correspondent from the Mediterranean Academy of Culture, Tourism and Trade (MACTT) of Malta, a large delegation of FareAmbiente adhere to the International Conference organized Euromed by MACTT, to be held in Malta 16 to 21 June 2014. “

It ‘as said the President of FareAmbiente Vincenzo Pepe.

The event was organized by the Mediterranean Academy of Culture, Tourism and Trade of Malta to present to institutions, companies, associations of the opportunities offered by the Horizon 2020, a massive funding program developed by the European Commission in support of research projects and innovation in Europe, as well as discuss intercultural right, very important issue at this particular moment.

“It ‘s necessary – declared Pepe – an Environmentalist Movement such as ours different from the traditional, of the European type, more mature and that he plans to combine development with sustainability, is integrated into Euro-Med projects that can raise awareness of peoples to preserve an ecosystem as sensitive as that of the Mediterranean. We believe that the initiative promoted by MACTT, trace a path acceptable, especially in the desire to create a network that acts specifically in the program of research and innovation, Horizon 2020, which could represent for our reality a great opportunity. “

Sergio Passariello, President of MACTT expressing great appreciation for the accession of FareAmbiente at the event, declaring his willingness to create a stable and concrete partnerships that can provide for participation in European projects in the field of international scope.

“In sharing what the President Pepe – Passariello declares – the goal is to improve access to EU funds of the socio-entrepreneurial connected to the Mediterranean basin and to improve, through the implementation of specific advanced training, the professional skills of the younger generation, in terms of environmental and eco-sustainable energy development of the territories. “

During the Great Benefit to be held in Malta, June 21, 2014, with the distinguished Patronage of the President of the Republic of Malta, Her Excellency Marie-Luise Coleiro Preca, the President Fare Ambiente Vincenzo Pepe will be named Cultural Correspondent Honorary MACTT.