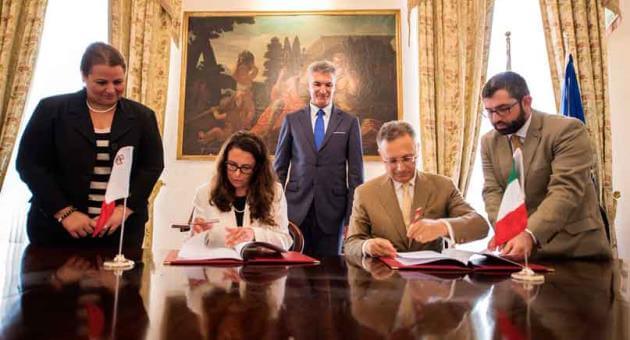 Cultural and educational agreement signed between Malta and Italy

The 15th Cultural and Educational Agreement was signed between Malta and Italy at the Ministry for Foreign Affairs and Trade Promotion in Valletta. Based on the cultural collaboration agreement signed in 1967, it identifies cultural and educational activities and cooperation opportunities for the 2017-2019 period.

The agreement aims to increase understanding between both countries’ communities, building on the economic foundations and diplomatic relations that already exist between Malta and Italy. Fiona Formosa, Permanent Secretary at the Ministry for Foreign Affairs and Trade Promotion, signed on behalf of the Maltese Government. Italian Ambassador Umberto de Vito signed on behalf of the Italian Government.

Attention will be given to direct collaboration between the universities and institutes for higher education of both countries, especially through the exchange of teachers and the implementation of joint research projects, particularly in the field of science.

Other areas of cooperation indicated in the agreement include music, publications, art restoration, preservation and management of national heritage, translations, archives and libraries, the promotion and dissemination of the Italian language and culture in Malta, scholarship opportunities, plus more collaboration in the film and television sector.