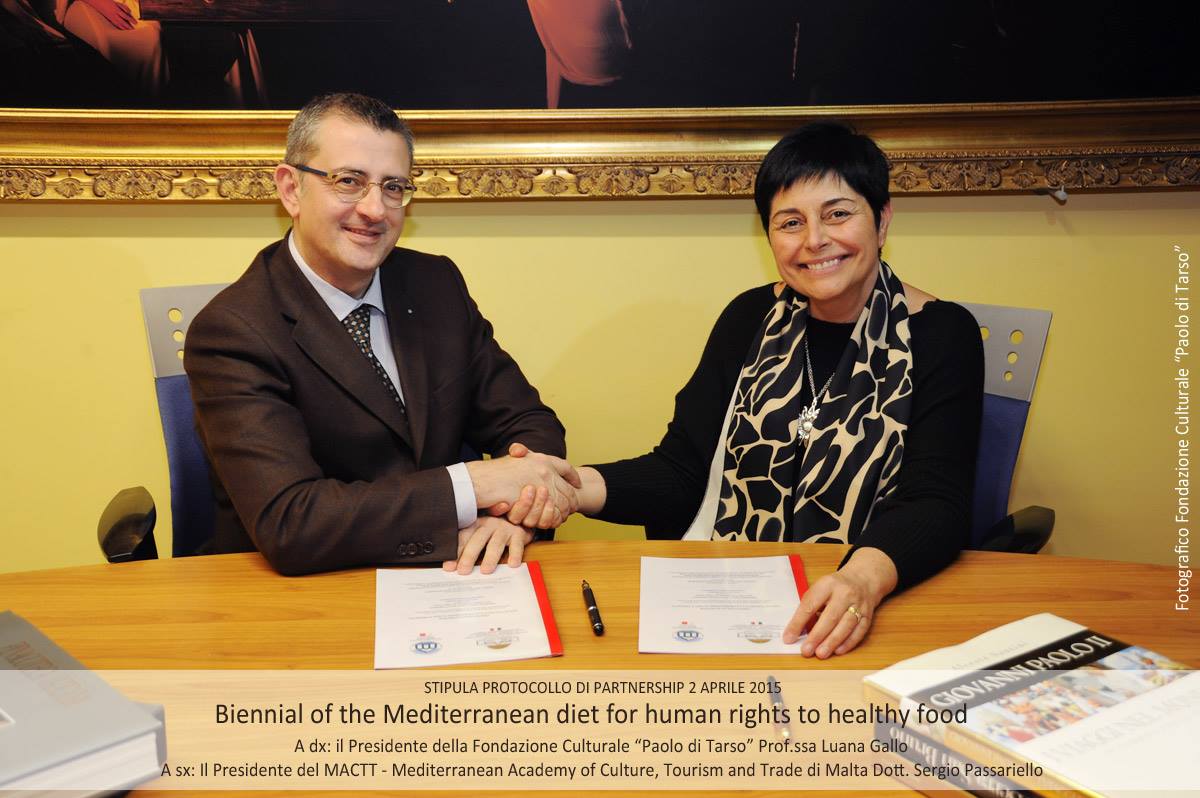 Biennial Mediterranean Diet 2016: together with Italy and Malta for “human rights” to the Healthy Food

Biennial of the Mediterranean Diet: Human Rights access to the Healthy Food and contrast to non-communicable diseases, join the Foundation “Paolo di Tarso” and the Mediterranean  Academy of Culture, Tourism and Trade of Malta.

Were stipulated on April 2, 2015 two protocols of Parnership between the Cultural Foundation “Paolo di Tarso”, Academy of the Mediterranean Diet and The MACTT – Mediterranean Academy of Culture, Tourism and Trade of Malta. This is an important step for the two institutions chaired respectively by Prof. Luana Gallo and by the Dr. Sergio Passariello, who now share the way for the creation of the first “Biennial of the Mediterranean Diet for Human Rights to Healthy Food” planned for the year 2016 (www.dietamediterraneaexpo.it). The Biennial aims to enhance the sustainable Agriculture and the food model of the Mediterranean (Mediterranean Diet nd r.) because it is able to counter the non-communicable diseases, among Cancer, Diabetes, Obesity, Cardiovascular Diseases. Diseases due largely, as the international scientific research maintain , the junk food that in recent decades has literally invaded our pantries and upset our eating habits.

The Absolute novelty of the Biennale is to look in a special way to the Human Rights to Food “Healthy”, orientation specifically wanted by the Foundation “Paolo di Tarso” Founder and actuator of the Biennale, whose President is also Director of the Master in Green Economy, Mediterranean Diet and Environmental Sustainability published by Di.BEST – Department of Biology, Ecology and Earth Sciences, University of Calabria. Feeding the Planet is a theme too general and the production of GMOs is the proof. So, if we want to effectively combat non-communicable diseases and protect the environment at the same time, we must speak of food production in a sustainable context that is able to make the best and in a natural way resources of the planet, without to poison him.

LUANA GALLO: TO FEED NOT ENOUGH TO PROTECT HUMAN RIGHTS

“There is a difference – said Professor Luana Gallo – between to feed and do it with the Healthy Food. We can feed employing GMO (Genetically Modified Organism ed.) and pesticides that kill both the environment and the Human Being, or directing the Agriculture towards sustainability to ensure that both the environment and the Human Being are protected and that the latter through a healthy diet can live healthy. For this and especially because the Biennial will start during the Holy Year of Mercy proclaimed by Pope Francis, we will try along with the countries of Europe and th Mediterranean to guide international civil society towards the Mediterranean Diet that the United Nations have declared Intangible Heritage Humanity “.

SERGIO PASSARIELLO: BIENNIAL IS A BIG INSTRUMENT FOR FOOD AND HEALTHY ECONOMY

MEDITERRANEAN CONVIVIALITY: BIENNIAL IS CELEBRATED AT THE TABLE

The Biennial will also be opportunity of a meeting of the Mediterranean people who teach us that the major issues are discussed at the table. Here, this is the soul of the Biennial that “celebrates” the altar represented by the “table” the great alliance of tastes and flavors, as the people. It is no coincidence that the very life of Christ in the Gospels gives us many suggestions as the lunch at Cana of Galilee and the Last Supper where precisely through the convivial representation Jesus of Nazareth establishing through the Bread and Wine, the route of the Grand Alliance Among Peoples.

In the Biennial, the Mediterranean Diet find his best performance at the Table.