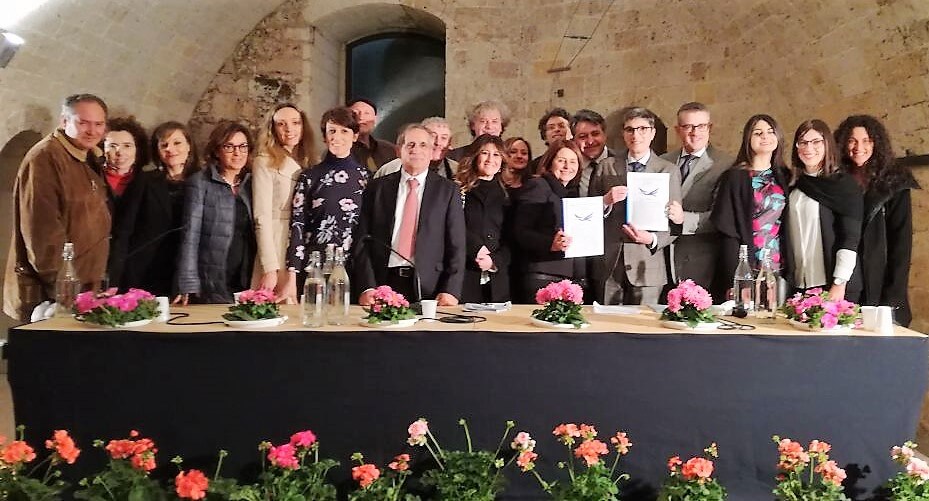 Biennale of the Mediterranean Diet, the Maltese NGO MACTT subscribes to the constitutive manifesto

Right to Healthy Food and Peace, the Maltese ONG is signing in Italy, in Corigliano d’Otranto, in the province of Lecce, a public poster with important international partners.

“I believe in this project,” said Sergio Passariello, President of MACTT Malta. Born from an idea of the Paolo di Tarso Foundation, it represents not only a starting point for dialogue between peoples and peace but an excellent tool available to everyone to make known the healthy diet and the rights attached to it.

“Two years of commitment and relationships that gave the opportunity – to continue Passariello – to bring the project to Expo 2015 that took place in Milan and to present it successfully at the FAO International Headquarters in Rome. The Government of the Republic of Malta has demonstrated its commitment to widening the focus on nutrition and promoting access to healthy diets by sharing the MDiet APP project, a mobile application that enables users to know the nutrition model of the Mediterranean Diet.

“With the signing of the Constituent Manifesto, there is an even greater consensus on the goals to be pursued for the realisation of a major event in Malta, which can be fully incorporated into the Mediterranean Dietetic Biennial Program for Rights Humans to healthy food “- concluded Sergio Passariello.
They attended the conference, in addition to the “Paolo di Tarso” Foundation, represented by Prof. Luana Gallo and Fabio Gallo respectively Chairman and Head of Relations with the Institutions, Mayor Avv. Dina Manti and all the Municipal Administration of the City of Corigliano D’Otranto, Peloponnese Region (Greece), Development Agency 4 of the Republic of Albania,  East West Investment Group of Moscow, Dr. Felice Ungaro, delegate of the President of the Puglia Region, Mr. Angelo Faggiano Secretary General Foundation Mediterranean Diet Ostuni, the President of the Night Foundation of Taranta Avv. Manera, Dr Elio Paiano Director of Environmental Education Center CEA, President of Coldiretti Lecce, Dr Caterina Mosca, Counselor and Anteas Lecce Association, and not least the Minister of Plenipotentiary Fabrizio Petri President CIDU – Interministerial Human Rights Committee of the Farnese who has sent A greeting message. Prof. Alberto Fidanza Honorary President of Biennial sent her good wishes with a video message.
academy, Culture, diet, mactt, malta, mediterranean, otranto, Tourism
error: Content is protected !!