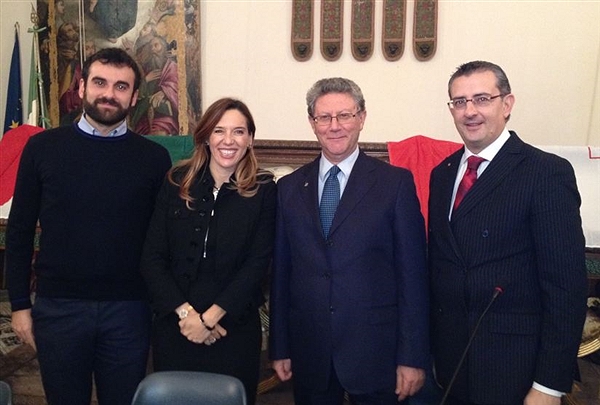 A historic visit that reinforces an age-old relationship between the glorious capital of the Maritime Republic of Amalfi, Amalfi Coast and the island of Malta and which can now resume with agreements for the development of cultural tourism , pointing toward euro – Mediterranean programs , intercepting new tourism and encouraging the seasonal adjustment .

But also cultural youth exchanges , international education and infrastructure among the topics discussed at the round table that took place on Sunday in the lounge Morelli.

” A significant moment for our community that Malta has with matrices historical-cultural -old – said the mayor Alfonso Del Pizzo – A meeting active now that will allow us to further raise Amalfi identifying new strategies for economic development .”
Excellent diplomatic relations between the two countries is also confirmed by the recent visit to Malta ‘s Prime Minister Enrico Letta, who subscribe to the new economic agreements has also appreciated and supported the proposal of twinning between Amalfi and the city of Birgu .
Ambassador Vanessa Fraizer said she was excited about the meeting. ” We share many historical and cultural routes with Amalfi- commented – The next Italian Presidency in the EU will be able to make more explicit the will of our countries bordering on the Mediterranean to give prominence to the prospects of our peoples .”

Programming as of 2014-2020 European joint projects were discussed with the actions of the members of the Maltese delegation . Aim to infrastructure and sustainable mobility for Mario Galea of Malta Enterprise , develop conference tourism , medical and sports during periods of seasonal adjustment for Antonio Pangallo , general secretary AssoMalta , foster new forms of tax agreements and sharing of international fora for companies in ‘ intervention by Aldo Zammit , Malta’s representative Ksi .

Feasible and practical programs that I can not disregard a good ability to learn about the process of European funding for Sergio Passariello , President of the Mediterranean Academy of Culture, Tourism and Trade. “Amalfi was not chosen at random , we aim to foster exchanges and tangible opportunities for development – said – Already in the next few weeks we undertake shared programs on education and international cultural exchanges .”

Ready for the twinning with the ancient town of Birgu Malta . “On the occasion of the New Year in September Byzantine sottoscriveremo officially the act – said the Councillor for Culture and Tourism Daniele Milan – A twinning that honors us and at the same time gives us the opportunity to focus on the objectives that we goals. At the conclusion of the round table , the mayor of Amalfi and the Ambassador of Malta were awarded by President Sergio Passariello the title of representatives of the cultural Mediterranean Academy of Culture, Tourism and Trade.

The Maltese delegation after meeting a group of tourism entrepreneurs represented by Gennaro Pisacane was also able to visit the show on the Arsenals with compass and admire the exhibited works of the master Pietro Scoppetta on the occasion of the 150th anniversary of his birth. Ambassador was also donated by a national flag of the Republic of Amalfi to seal the will of the citizens to believe in partnership with the brothers Maltese